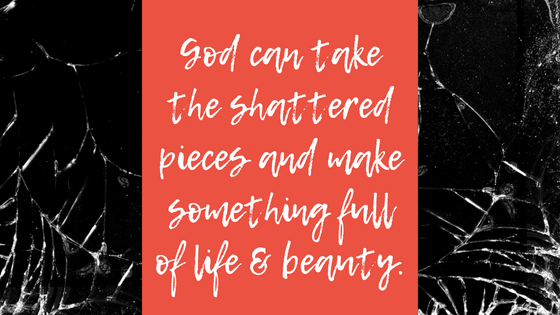 When my glass heart was shattered,
Some pieces went missing.
I tried to pick them up,
But the shards only caused more bleeding.

Yet every day I return to the ruins,
And once again I try to pick up the pieces on the floor.
But I drop them again as more blood falls,
Causing the few fragments to become many more.

See the flesh on my hands was never capable of truly repairing.
All they can do is collect some of the pieces,
As I wince in pain and bite my lip,
And attempt to apply some temporary adhesive.

But there are minute pieces that are still missing.
No mortal hand could find the full amount.
Some hide in crevices, some in the dust.
There are more pieces than I can understand or even count.

And even if every piece was accounted for,
No human effort could put them all together.
It would be a puzzle beyond one’s finite comprehension,
Not a question of “if” but an answer of “never.”

But there is one called the Great Physician,
Whose hands are stronger, whose eyes see deeper.
His skills are unfathomable and unmatchable,
He is the ultimate Healer – not just a reliever.

He takes the shards of my sin-sick heart,
And carefully trims, shapes, constructs, and assembles.
Sometimes it cuts, sometimes it stings,
But He knows when to apply pressure and when to be gentle.

He is not just repairing,
But rather He is creating.
A new heart, pristine and beautiful.
The process hurts now, but ultimately, it’s liberating.

My cold, hard, once dead heart,
Is being transformed to one that is full of life and His beauty.
And while this life may still batter it,
It will not and cannot destroy it completely.

For it sits in its Maker’s hands, strong and good
From His throne on high it will not fall,
His steady hands hold it now and for always,
I know He will see it through it all. 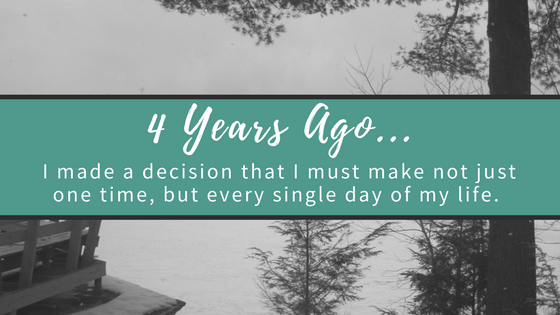 Four years ago today, I recommitted my life to Christ.

Before that, I was a model church kid, involved long before I can actually remember. I went to Sunday School until I had aged out, sung in the choir, volunteered at VBS, and tried to do everything I was “supposed” to do. I had believed in God since I was old enough to verbally say so. Over the years of childhood, I had moments of doubt and faith. By my teen years though, regardless of what I was doing or not doing, my faith would more accurately be described as knowledge of God, rather than a relationship with Him. On this day four years ago, that began to change.

It was at a retreat in New Hampshire. Somewhat ironically, I was a “leader” and not a youth group kid. I was a sophomore in college trying to figure out what the heck I was doing with my life. I happened to be friends with the youth director at my church and I was well versed (pun somewhat intended) in the Bible, so she wanted me to come along as a leader. I thought I’d be helping wrangle kids, I didn’t expect to come away any different. I don’t remember exactly what the speaker said, but I remember praying to God in a way I hadn’t before and recommitting myself to Him. I came home with a rekindled faith and a renewed hope.

In a journal entry right after I returned home, I wrote:

…The strangest thing happened even before the retreat. For me, anxiety has been a way of life lately…When it came to this retreat however, I felt no anxiety…During the entire weekend, I felt an incredible peace. All I can say is that God was there. I did not feel any anxiety. It was one of the most freeing things ever.

Anxiety had been a major part of my life in the years preceding this retreat. Some days it made it almost impossible to function as a ‘normal’ adult. Even simple tasks like ordering lunch could be a challenge. A weekend without anxiety was like a drink of fresh, cool water after a long, strenuous walk in the desert.

I’m not going to say that everything changed right after that. In fact, I still struggle with some of the things I was struggling with at that point in time, including anxiety. Some days are just as hard if not more so than the times before the retreat. Sometimes I feel really down on myself that things haven’t changed as much as I would have liked. Still, God has been, is, and will remain faithful. He has shown me things in His word, given me peace in raging storms, and been a rock that doesn’t move even when everything in my life seems to be changing for the worse. In the clearer moments, I know that God will do with me according to His time and His will, not my own selfish, impatient desires. His love, power, and mercy are not dependent on me or my feelings.

The day I recommitted my life to Christ wasn’t the end. It wasn’t a one time decision fueled by the fun, excitement, and engaging conversations of a weekend retreat. In fact, I’ve had to learn the hard way that I need to make this decision every single day of my life. My heart is fickle, and many times it doesn’t want to follow Jesus. Thankfully, God’s love doesn’t shift with circumstances, feelings, or whims. Lamentations 3:22-23 says it better than I ever could:

The steadfast love of the Lord never ceases; his mercies never come to an end; they are new every morning; great is your faithfulness. 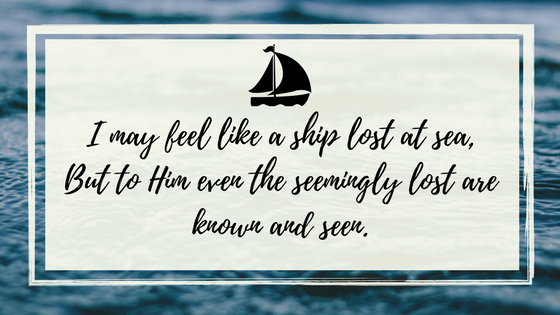 Sometimes it feels like I’m a ship lost at sea,

Blown off course by deep-seated anxiety.

I am left alone with inner turmoil and self-directed aggressions.

I am left with no real discernable direction.

See, this anxiety is a storm that not only batters and bruises,

Is whispers and shouts and permeates every fiber of my daily reality.

It’s told me that I am nothing, not worthy of anyone’s time.

It’s told me that I’m not good enough, and never will be.

It’s told me that every word I speak is a word too many.

It’s told me that every effort is just a waste of breath.

So here I float, alone in a sea of thoughts and tears,

Not sure which direction to take,

Afraid of the approaching night when the storm will rage again.

Will the crashing waves of fear and dread finally overtake my little boat?

Will the gusts of violent thoughts finally drag me under?

Will I drown in this sea, never to see the light of day again?

And though it seems the night will never end, hope comes in the fourth watch.

Hope shines in the darkness of night and does the impossible.

Hope walks on waves that logically should swallow.

Hope beckons me and reaches out.

Hope instead speaks my name and says to “come.”

Hope invites me to share in the impossible with Him.

The wind and waves still seek to drown me,

But even they must bow to His commands.

I may feel like a ship lost at sea,

But to Him even the seemingly lost are known and seen.

Means that I can continue on.

The waves will not take me prisoner forever.

He who calms the waves on the sea,

Can surely calm them within me. 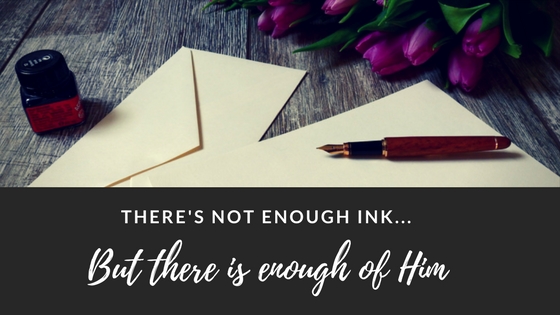 Layla* said  “there’s not enough ink.”
And what she said is what I think.

There are not enough words to describe the feelings buried deep and suppressed.
Somehow it’s not enough to just say I’m depressed.

All I know is that I’m so tired, in every way a person can be.
Drained physically, emotionally, mentally, and spiritually.

I guess the seeds I unintentionally sowed were really the heartiest of weeds.
They took root and choked out anything and everything good.

You say to come to You and You will give me rest,
Yet even when I try to pray, I often feel such distress.

These words are hollow,
like the feeling harbored deep in my chest.

And as I sink deeper beneath these waves,
I hear a whisper that He is there even in the depths.

He made the sea and He made me.
He knows both intricately.

No height nor depth – not even the Mariana trench –
can clutch me from His fist so carefully clenched.

There may not be enough ink,
but there is enough grace and mercy to keep me from the going beyond the brink.

The sea swallows sin, but it won’t swallow me.
There’s not enough ink, but there is enough of Him.

*Layla is a good friend of mine. She wrote a poem that contained the phrase “there’s not enough ink” and ever since she shared that poem with me, the phrase comes to my mind as an accurate description of how I sometimes feel. Her poem, as well as her love and the fact that she continually points to God, inspired this version. 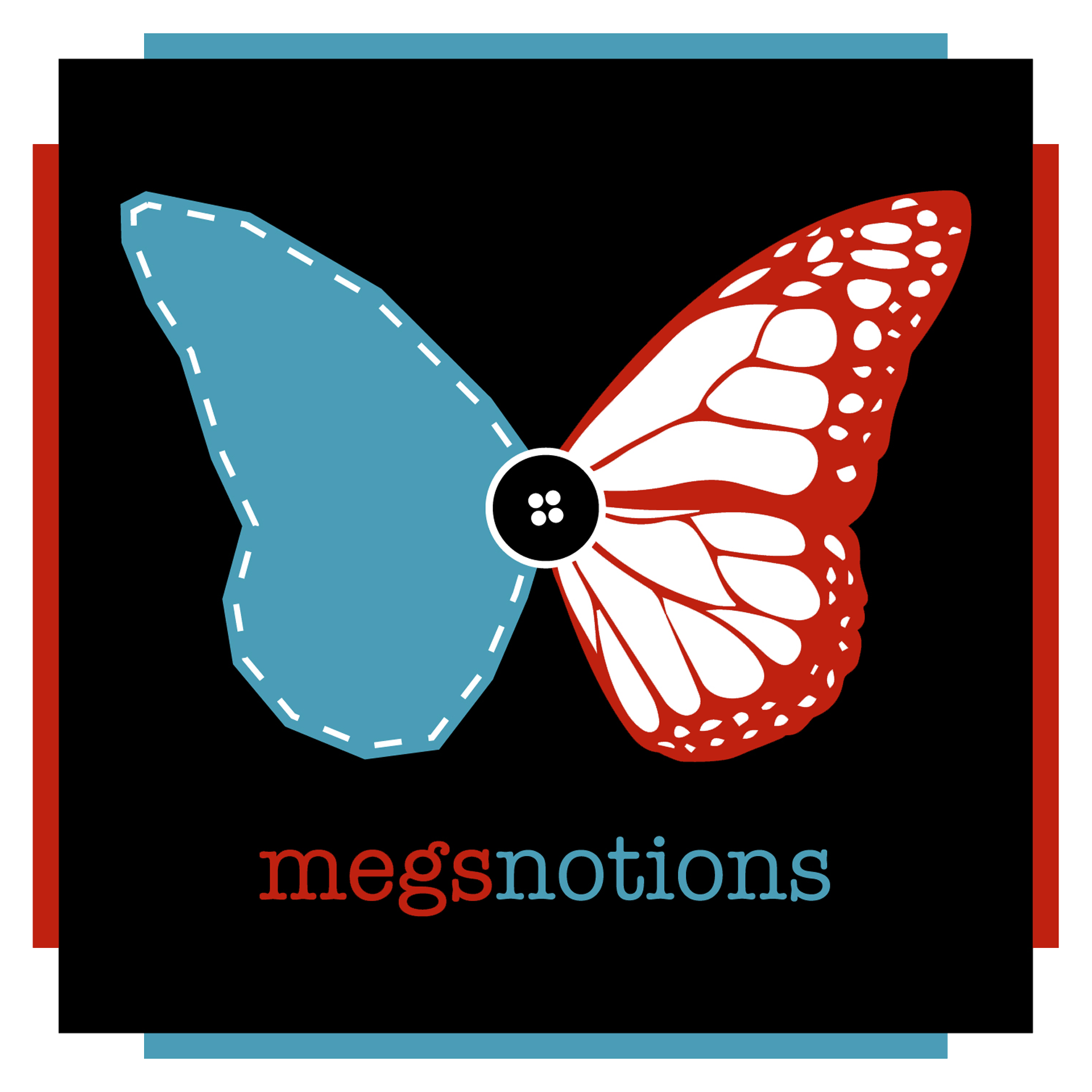 A little bit of hope Music Monday poetry Thoughts on Matters of Faith Uncategorized What events teach us
Loading Comments...