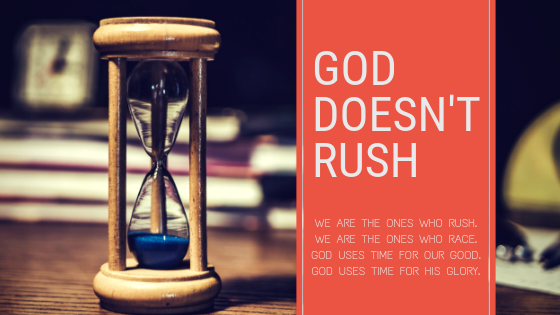 Everyday, we’re rushing. Rushing to get work done, rushing to check things off the ever growing to-do list, rushing to create a happier life, rushing to shape our identities with all the things we’ve done. We rush about our days to get this and that done and often wonder if we will have the time (and energy) to complete all we have to do or feel we need to do. This time of year, we rush at an even more rapid pace, as we rush to get the perfect gifts for everyone on our lists and rush to make a picture-perfect Christmas scene in our homes. We rush. We run. We race against the clock. We bow down to time. We bow down to the things our little screens scream we need. We bow down to lists and desires. I’m as guilty of this as anyone else.

But God is not rushing.

God was never rushing. He is outside of time. He isn’t confined by it. We rush. He works in the best time.

I recently re-read the story of Jesus raising Lazarus from the dead in John 11. Verse 5 stopped me in my tracks for a moment.

“Now Jesus loved Martha and her sister and Lazarus. 6 So, when he heard that Lazarus was ill, he stayed two days longer in the place where he was.”

At first glance, this verse doesn’t make a lot of sense. When a dear friend or family member is on death’s doorstep, we (rightfully and understandably) rush to their side if it is at all humanly possible. In this scenario, though, Jesus stayed where He was for two days. He didn’t do this out of apathy or selfishness. He did this because He loved Mary and Martha and by Him staying where He was for a couple days, God would receive greater glory.

In those two days, Lazarus died. His family and friends grieved and were hopeless. But that isn’t the end of the story.

Jesus arrives and sees Mary, Martha, and the others mourning. He asks where they have laid Lazarus and He goes to that place. He asks for the stone to be rolled away, which sounds crazy to all the mourners as the stench of a decaying body is strong. They do as He says though and Jesus calls Lazarus out of the tomb. Lazarus comes back to life. Hope is restored. God is glorified. And perhaps the faith of those involved grew.

Had Jesus rushed to Lazarus and healed him of his illness immediately, none of those things would have happened.

This story is one of countless examples both from the Bible and the lives of believers shows that God’s timing is perfect. His timing is sometimes (often times) a bit different from our own. Sometimes He seems painfully slow or perhaps even absent. But He is faithful. He knows how to use time in our lives to grow us in faith and to sanctify us. God isn’t confined by time but He uses it as a tool for our good and His glory.

This is something I have been struggling with. I have begged God to change certain things in my life and my growth in Him feels agonizingly slow. I want things to change with the flick of a switch. I want a painless healing. I want painless change. God is capable of that. He is capable of all things. But true growth and change don’t happen without time and sometimes pain. Instead of instant gratification for my desperate pleas, God tells me two things that I don’t really want to hear but that I need to hear:

In all my worries and anxieties, in all my rushing to be good at things and succeed at work and in life, God says to be still. Stop. Slow down. Don’t rush. Know that God is here and God is in control. I may not know how many days I have and it may feel like a race against the clock for me, but God knows how many days I have and what it will take to fully sanctify me. He will bring the good work He began in me to completion – not in my time, but in His.

And while my tenancy is to rush, it’s great news to hear that God doesn’t rush. For when an artist rushes, the work of art rarely comes out well. Rushing rarely produces quality. We are God’s creation, creations being created, His masterpieces. As a dedicated Creator, He takes His time and skillfully molds us. We just have to be still and trust His promises.